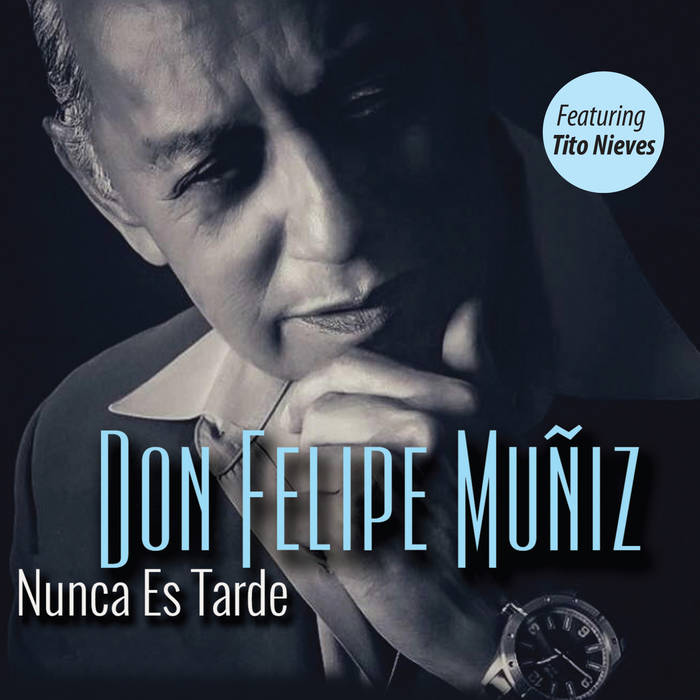 Don Felipe Muñiz debut CD of soulful boleros. With the passion of his youth, this 83 year-old, Grammy-nominated crooner proves that it's never too late, Nunca Es Tarde, to follow your dreams. Released on the Trista Records label, this CD is full of welcoming original boleros written by Ecuadorian composer, Medardo Ramani Rovayo and featuring a duet with Puerto Rican Salsa recording star Tito Nieves in both Ballad and Salsa versions. No stranger to the stage, which he has shared with his iconic son Marc Anthony, Don Felipe Muñiz now delivers an inspiring collection of songs that will surely stand the test of time.

On October 13, 1935, Don Felipe Muñiz was born in San Juan, Puerto Rico to a family that comprised of his parents and six siblings.

At the age of eleven, Don Felipe, his parents and his siblings moved to New York City in search of an improved life and fresh opportunities.

During his teens, Don Felipe began working to support his family monetarily. As a young man, his first two children were born; Michael and Susie.

In 1961, he produced his first quartet; The Quartet Villalba, a foursome that performed in numerous diverse clubs in New York. In the years to follow, his last three kids Yolanda, Maribel (who died at the age of nine) and Marc Anthony were born.

During these years Don Felipe dedicated himself to his appetite for music, evolving his talent with Mr. Pedro El Canario, owner of the radio station WHOM New York. The Quartet Villalba frequently rehearsed in Don Felipe’s kitchen, where a young Marc Anthony would sometimes sing, and would ultimately become one of the world’s most prominent vocalists and actors.

In addition to singing, Don Felipe has several talents; including acting and drawing. Don Felipe committed his life to nurturing his children, and to giving them a life free from drugs and the street life. Secure in that, he is now embracing his dreams.

Don Felipe was, is, and will be a significant influential component in the life of his children, with whom he still relishes an outstanding relationship.

Don Felipe believes strongly that it is “Never Too Late” to accomplish what one has always desired. That’s why, at eight years old, he decided to embark on the fulfilment of a lifetime dream that was always in his heart; to record a musical production. His first album, “Nunca Es Tarde”, gives honor to the saying, “Never Too Late”.

There are many magnificent surprises in this musical production, including a duet with internationally distinguished singer Tito Nieves.

Don Felipe enjoys very good health and promises, if God allows, he will achieve his dreams before departing this world to reunite with his beloved daughter, Maribel.

Bandcamp Daily  your guide to the world of Bandcamp